View source
watch 01:36
We're Getting Mutants in the MCU - The Loop
Do you like this video?
Play Sound

Action Force was a toyline in Europe which evolved from an entirely local creation into a renamed import of G.I. Joe: A Real American Hero. Because of the shifting nature of the characters in the toyline, corresponding Action Force spin-off material has a very complicated continuity.

The British toy company Palitoy had had success with the larger Action Man (itself a licensed copy of the US G.I. Joe) but by the early 1980s sales were falling. At the same time the Star Wars toyline, which Palitoy was the European distributor for, proved revolutionary in popularising the smaller 3.75 inch size of action figure. In 1982 Palitoy launched Action Force with a series of contemporary and historical military figures, from many different countries. Additionally several vehicles for the figures were released as well.

The figures proved highly successful and so for the following year the range was heavily expanded. This time round the figures and vehicles were given various groupings within the line, with a unified enemy in the form of the Red Shadows led by Baron Ironblood.

A significant development was the licensing of several figure and vehicle moulds from the US G.I. Joe line, released in different colours as new characters. The Action Force line continued in this vein in 1984.

In 1984 Alfred Pallett, one of the owners of Palitoy, died and the company began to wind down its operations. The company was purchased by Hasbro, who opted to continue the Action Force toyline but now import G.I. Joe figures directly. The storyline for the toyline developed - Action Force was an international counter-terrorist organisation tackling the menace of Cobra.

Although predominantly now an import of the G.I. Joe line, various changes were still made. In keeping with the premise that Action Force was an international organisation many of the file cards were amended so that the characters were given an international background. Furthermore the European releases lagged behind their American counterparts by about a year.

In keeping with this British printings of the comic book series and screenings of the cartoon were amended to change "G.I. Joe: A Real American Hero" into "Action Force: International Heroes".

The toyline continued in this vein until late 1989 when the name of the toyline was changed to G.I. Joe the Action Force. A special mini-comic available free in shops and also released as part of the UK Transformers and Action Force #245 explained that Action Force and its US counterpart G.I. Joe had opted to merge so as to better fight the menace of Cobra. The change also made the marketing easier. After a couple of years the suffix "...the Action Force" was dropped from the toyline and tie-ins and the transformation was complete. 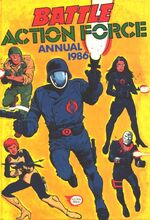 In July 1983 Action Force appeared as a temporary strip in the British war comic Battle, published by IPC Magazines, and proved incredibly popular. From October 1983 the strip became permanent and the comic was retitled Battle Action Force. The Action Force stories would come to dominate the title and Palitoy would use it heavily as a vehicle for promoting the toys.

IPC would retain the rights to Action Force until the end of 1986, during which time the transition in the toyline from Palitoy to Hasbro would be covered in continuity, with Baron Ironblood betraying the Red Shadows and changing his identity to Cobra Commander and founding the Cobra Organisation. Similarly the Red Shadows character Red Jackal survived the destruction of the group and became Destro. After IPC lost the Action Force rights the comic continued as Battle for another two years. 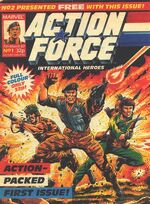 From February 1987 the British division of Marvel Comics began publishing Action Force, a 24 page weekly comic that combined relettered reprints of the US G.I. Joe with British originated strips, fact files and humour strips, in the same vein as their existing successful Transformers comic.

The originated stories featured Action Force as being based in Europe and led in the field by Flint (here given the name David Faireborn and being from Lincoln in the UK) under the command of Trent. The G.I. Joe reprints were often amended and edited in order to tie in with this. For instance Flint's first appearance in the US was his first meeting with Lady Jaye. For the UK comic it was rewritten and relettered so that now both were visiting the US team. Such changes make it hard to fit the original Action Force stories into the US comic's continuity. Additionally after the weekly title folded the reprints would become more and more G.I. Joe in all but name and eventually even that would change. 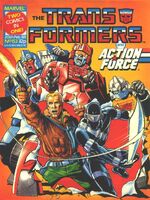 After fifty issues Action Force came to a close. As was the standard practice in the British comics market at the time the title was nominally merged with Transformers, which now had the cover title Transformers and Action Force from issue #153 onwards. In practice the effect was that the G.I. Joe reprints now took over the back-up strip slot in Transformers on a permanent basis, although the Action Force comedy strip Combat Colin replaced the existing Transformers comedy strip Robo-Capers.

Separate Action Force annuals and specials were also released by Marvel UK from 1987 onwards, with the title changing in line with that of the toyline. In addition there was a weekly comic launched in autumn 1989 called The Incredible Hulk Presents which contained further amended reprints of the G.I. Joe strips. It lasted just twelve issues. 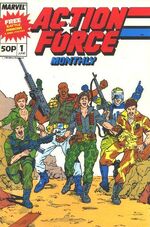 The British originated stories did not disappear either. Marvel UK was in this period experimenting with a series of monthly books in a smaller format, in part to help break into the US market. From May 1988 Action Force Monthly was launched, containing full length stories. The stories were also written so as to be easier to fit into US continuity. The series was also released in the US but under the title of G.I. Joe: European Missions. The series lasted fifteen issues.

Note: G.I. Joe went by the name 'Action Force' in Europe. They were a similar outfit to G.I. Joe in every sense. The name Action Force: International Heroes referred to the team consisting of soldiers from around the world. In the United Kingdom certain figures had their filecards altered to include international birthplaces in order to appeal more to a UK market, such as Lady Jaye, whose UK filecard was amended to show that she was from Cork, Ireland, and Ripcord, whose filecard stated he was from Manchester, United Kingdom.[citation needed] Falcon who was released in 1987 was from Glastonbury, Somerset, United Kingdom.[citation needed]

The early release Action Force figures were released by Palitoy and were repaints of US released figures. They included: