DC Comics, Inc. is one of the largest and most successful companies operating in American comic books, and produces material featuring many well-known characters. DC shared more than 80% of the American comic book market in 2008 together with Marvel Comics.[1]

The initials "DC" came from the company's popular series Detective Comics, which featured Batman's debut and subsequently became part of the company's name.

At the start of the Silver Age of Comic Books, DC launched their Showcase title to feature new and minor characters - like the Flash, Green Lantern, James Bond and Sgt. Rock - as a way to gauge reader interest in them without the risk of featuring "untested" characters in ongoing titles. The original series ran for 93 issues, starting in suspending publication in September of 1970.

Within months of the launch of Hasbro's original 12" GI Joe action figures,[2] the toys inspired their first comic appearance. Showcase issues #53 and #54 featured six short stories of GIs in the Pacific, European and North African theaters of World War II. The two issue story arc asked readers to judge the six short stories and vote on which soldier showed "the kind of blockbuster bravery that put the stars and stripes in our flag!" The results of the vote are currently unknown.

Both issues had covers drawn by Joe Kubert, who went on to do other WWII art for GI Joe, namely the packaging art and comics for the Sgt. Savage and his Screaming Eagles line.

Other GI Joe artists/writers who have worked for DC include: 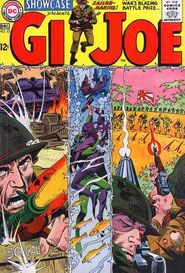 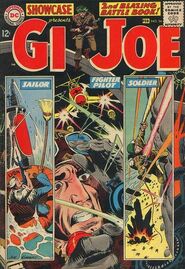