Joepedia
Register
Don't have an account?
Sign In
Advertisement
in: Articles in need of images, Stub, G.I. Joe bases 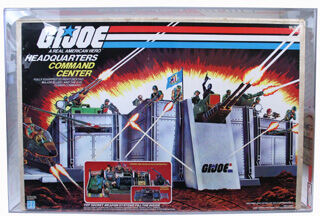 The G.I. Joe Headquarters is a base of operations of the G.I. Joe Team from the A Real American Hero series.

The G.I. Joe Team's headquarters is a mighty stronghold. It has many names: Joe HQ, G.I. Joe Base, the main base and all but it all can be summed as G.I. Joe Headquarters. Unlike the largely underground installation, this one was rectangular in shape with angled construction, with the central block featuring a two tier entry/exit for aircraft (above) and ground vehicles (below), and a number of defensive turrets, including a massive cannon, built into the center block, which is likely for last resort, given that it was never used.

Strategic command and base operations are coordinated at Joe headquarters. Distinguishing features include a fortified wall and large cannon emplacement. Interior of the base includes dining, resting, training, and recreation facilities. Military tactics are briefed in a conference room which has a large screen on the wall. Tactical data as well as communications are displayed on this screen. G.I. Joe uses a communication band they refer to as Joe frequency. The size and terrain has shifted from episode to episode.

The Joes' pre-fab fortress was based on the toy.

The Headquarters was originally sold as part of the 1983 lineup of the A Real American Hero toy line. This playset was the design basis for the command center that which you see in the A Real American Hero animated continuity. Since this playset did not really have a fancy name, it is often referred to as either Headquarters or Command Center.
1983 blueprint from YoJoe.com

A new G.I. Joe Headquarters was released in 1992. For the uninitiated, it would seem to be the same as the 1983 model as the toy is basically just a wall you position your other G.I. Joe toys with. Upon closer inspection, they only go so far as they resemble each other. Instead of a cannon, the feature this time is a multi-platform weapon.