Joepedia
Register
Don't have an account?
Sign In
Advertisement
in: Pages using duplicate arguments in template calls, Stories not written by Larry Hama

Home Is Where the War Is

"Home Is Where the War Is"

Clutch takes a vacation but the war against Cobra even reaches home.

The story begins with Clutch, Wild Bill, Gung-Ho, Scarlett and Flash running away from a Cobra plane coming to strafe at them. It is actually a training mission. For someone who is not a tactical leader, Clutch seems to be leading the way. They reach their goal with Hawk waiting for them. Hawk compliments the team for reaching their objective on less time and gives Clutch his furlough papers.

Clutch catches the bus to New Jersey on time. Hours later, he drops off somewhere near a bridge. As he is crossing the bridge, a car suddenly and seemingly nearly hits Clutch. The driver turns out to be his friend Billy. Billy works for a company that builds experimental cars and takes him to his factory. As they enter the compound, a security guard stops them demanding Clutch show his security clearance. Billy assures the guard and they continue. They go to Billy's dorm. Clutch takes a shower. After he has finished, he overhears Billy angrily conversing on the phone. Clutch asks Billy what it was all about. Billy assures him it was nothing to be concerned. Billy leaves the room, and Clutch decides to secretly follow him.

Billy enters a top security room. This makes Clutch suspicious as to why a car factory would have this kind of room. He is about to open the door when it suddenly opens and a Cobra trooper is standing in front of him. Clutch ducks behind the machineries. A few more Cobra troops come out and hunt for him. Clutch manages to knock them all out. Clutch enters the top secret room to find more Cobras and Billy. Clutch could not believe Billy being in cahoots and instead believes they must be forcing him. Clutch makes his surprise appearance to everyone, but Billy knocks him out cold.

Clutch wakes up tide. He is going to become an experiment for Cobra's latest jetpack technology. Billy reveals his family is being held hostage by Cobra. Before being blasted off, Billy slips a knife inside Clutch's arms. With the test a success and Clutch still high up in the sky, the Cobras remotely shutoff the jetpack thus Clutch is falling to his death. Clutch manages to be free of his ropes and hotwires the jetpack thus gaining control. After that, Clutch goes to rescue Billy's family and contacts the Joe team. The team arrives and shuts down Cobra's operation. A grateful Billy thanks Clutch and offers him to stay with his family for his vacation. Clutch declines citing he's had all the rest and relaxation he can stand.

"Billy - and half the Cobra agents in existence." 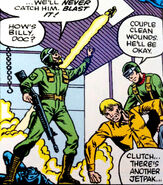