Start a Wiki
The name Low-Light refers to several versions of the same character.
For a list of the other versions, see Low-Light.

Low-Light is a G.I. Joe character from the A Real American Hero series.

Low-Light is one of the sneakiest members of the Joe Team. He can move through foliage and in the dead of night virtually undetected. He can maintain his position and be still for hours. It doesn't matter what advantage the enemy has, when the sun goes down and you can't even see two inches from you, that is when you know that the darkness is where Low-Light truly reigns. Low-Light's superb sniper skill enables him to pick off his targets in even the lowest of illumination affordable. He prefers to maintain his own night-vision equipment. He actually made his own innovations in image-intensification, mostly self-taught, and even holds two patents from his efforts.

In stark contrast to his present-day rep, his childhood was not an easy one. The dark has given him near endless nightmares. He feared the creatures of the dark and loud noises startle him. His father often takes him on hunting trips to accustom him to his phobias. An unfortunate incident, if you could call it that, on one trip separated the two and Low-Light was forced to fend for himself for several weeks. When authorities finally found him, he has changed. He used to be afraid of the bogeyman, we think he has become one himself.

There is some difference between the fiction provided by Low-Light's 1986 filecard and his childhood origin in other media. In the filecard, a young Low-Light lost his fear of the dark when he became lost in the woods. In the G.I. Joe: Order of Battle comic, Low-Light's father forced him to spend the night in a county dump with instructions not to come home without 20 dead rats. It is possible that the version found in the Order of Battle was meant to be the original version but the idea of a father leaving his child alone in a dump at night must have screamed notions of child abuse. Another possibility is that the background was changed to fit the cartoon episode "Nightmare Assault," where Low-Light has a dream of his abusive father. 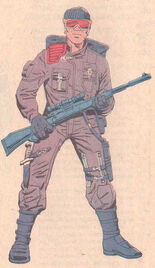 Low-Light was then part of a team who managed to transmit information on Cobra operations in Italy despite much resistance.[1] He was then on a team who stopped Cobra obtaining a powerful laser driven by diamonds[2] and subsequently part of a team who investigated an attack on a W.H.A.L.E. in the Atlantic Ocean.[3] Later he was part of a G.I. Joe team in the Latin American county of Sao Cristobel who prevented Cobra from securing a nuclear warhead.[4]

Retrieved from "https://gijoe.fandom.com/wiki/Low-Light_(RAH)?oldid=52126"
Community content is available under CC-BY-SA unless otherwise noted.