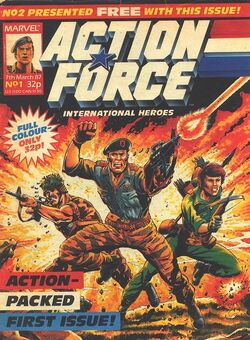 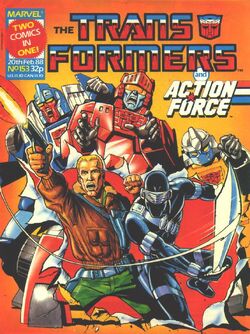 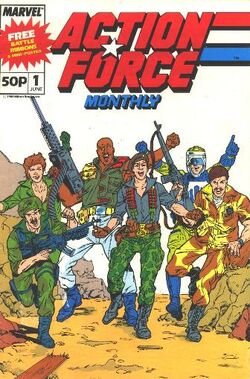 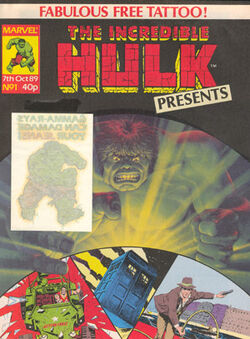 Marvel UK was the British division of Marvel Comics. In the late 1980s and early 1990s it published a series of G.I. Joe comics albeit under the successive titles used by the UK incarnations of the toyline, Action Force, G.I. Joe the Action Force and G.I. Joe. Today it forms part of Panini Comics.

In 1972 Marvel Comics established a British publishing arm to tap into the strong weekly comics market in the United Kingdom. Initially only reprinting material from Marvel's US titles, it soon moved towards also originating material, with the first Marvel UK creation being the superhero Captain Britain. In the late 1970s and 1980s it launched a series of licensed titles using properties from both television, such as Doctor Who Weekly/Monthly/Magazine, and toys, the most prominent of which was Transformers. The latter was a weekly title which combined reprints of material from Marvel US with new stories originated in the UK.

In 1987 Marvel UK aimed to reproduce the success of Transformers with two new licenced titles, Thundercats and Action Force. They had secured the rights to the latter after IPC Magazines had published Battle Action Force for three years. Marvel UK's weekly Action Force lasted fifty issues but was then nominally merged with Transformers, becoming a back-up strip in that title. The reprints of the US G.I. Joe would run on and off for three years. In addition Marvel UK would continue the separate annuals until 1991, and also run several specials.

In 1988 Marvel UK sought to venture in a new direction with the launch of a series of A5 monthly titles that aped the US format, rather than the A4 weekly titles that were more normal for the UK market. These titles included Dragon's Claws, Death's Head and Action Force Monthly. Unfortunately Marvel UK lacked a US distributor and so both Dragon's Claws and Death's Head lasted only ten issues each. Action Force Monthly was more fortunate as it was simultaneously published in the US under the title of G.I. Joe: European Missions.

Whilst Marvel UK titles tended to focus on a single character or property, many other British comics were anthologies featuring a wide variety of strips. For some time Marvel sought to create an anthology title of its own, and in 1989 they launched The Incredible Hulk Presents.[1] This title featured more reprints of the US G.I. Joe, alongside reprints of Marvel US's The Incredible Hulk and an adaptation of Indiana Jones, together with original Doctor Who stories. The title lasted only twelve issues.

In the early 1990s Marvel UK secured a US distributor and once more launched a series of A5 titles aimed at the comic collectors' market that predominated for Marvel US, featuring many alternative superheroes. However the major downturn in the comics industry from 1993 onwards hit Marvel UK badly and many titles came to an end. The division was sold to Panini Comics, who had been part of Marvel Europe, and had already been reprinting American material across Europe for several years. To this day Panini continues the Marvel UK legacy including Doctor Who Magazine and reprints of Marvel US superheroes. It also publishes licensed comics including the 2009 G.I. Joe series.

Retrieved from "https://gijoe.fandom.com/wiki/Marvel_UK?oldid=51595"
Community content is available under CC-BY-SA unless otherwise noted.