Pathfinder is a G.I. Joe character from the A Real American Hero and G.I. Joe vs. Cobra series.

Pathfinder's father was a Korean War veteran who taught him the finer points of military reconnaissance. He was not considered to be too young to learn how to rough it out in the wild swamps of Florida that it enabled him to breeze through much of the Army jungle training. It came to the point where he's teaching everyone including the instructors what jungle survival is all about. Soon thereafter, he got his certification as a jungle assault specialist and went on his way to become part of the Joe Team.

Voiced by the actor: Garry Chalk [1]

In the episode "United We Stand" Ambush and Pathfinder have to work together or perish after salvo is brainwashed by cobra and cobra commander order the G.I.Joe not to attack if they so he will launch the missiles world wide... since ambush and pathfinder are the 2 only G.I.Joe not in activate duty while recovering in the infirmary its up to them to infiltrate the cobra base to stop cobra commander.

In the following episodes: "Granny Dearest" In Chicago while Captain Grid-Iron and Pathfinder inside the Battle Bunker arguing that their lost , Metal-Head's efforts to steal "G.I. Joe's new levitation turbine" are interrupted by a visit from his Granny which led to failure of the mission. While Grid-Iron explaining to Freefall and Pathfinder why they need to transport the "G.I. Joe's new levitation turbine" by train and after a visit to Cobra's base in Lake Michigan, Metal-Head leads an other attack on a train being used to test the device with Granny's help, he hijacks the train and brings the turbine to Cobra, where it is installed to power a new Floating Fortress. So Freefall infiltrates the Fortress and uses his knowledge of Metal-Head's fibs to his Granny to maintain cover. He is soon joined by Pathfinder as the Fortress attacks Chicago. Joe forces are unable to dent the Fortress from outside, but when Metal-head Granny learns the truth and that Cobra Commander is trying to take control the US meeting and the world so she defects by helping Freefall and Pathfinder overload the Fortress's engines. while Grid-Iron with others Joes are fighting the cobra troops and pushing back their attacks

In the episode "Victory at Volcania, Part 1 and Part 2" Cobra attacks while the Joes are resting on their island Club Joe, Bullhorn and salvo are fishing instead of playing football with others when their suddenly attacked by cobra and are captured after learning of their plans they escape to warn the others and while General Hawk is questioned for his usefulness to G.I. Joe team and Cobra has the Joes on the run. Captain Grid –Iron and Bullhorn attack the volcano base to stop the laser guns and Destro to distract them while Hawk and Ambush climb the head of mountain to set the explosives.

In the episode "Pigskin Commando" Sgt. Slaughter is kidnapped by Cobra Commander and Range Viper leader and its up to Grid-Iron to save him. While Bullhorn and Pathfinder must follow Grid-Iron to keep him safe from other cobra attacks

In the episode "An Officer and a Viperman" Someone from G.I. Joe is leaking sensitive information. Pathfinder, Ambush, and Topside go undercover and join Cobra in order to find out whether there is a traitor in G.I. Joe.

In the episode "D-Day at Alcatraz, Part 1 and Part 2" Cobra is finally arrested and put in prison...but there is more to their capture when Pathfinder suspect something is fishy he try to persuade his friend Grid-Iron to listen to him but he doesn't and say cobra is history and now their mission to guard the the "Comstock load submarine PM GeneratorX (EMP-electromagnetic pulse)". So Pathfinder disobey the orders of his Captain and friend goes on a solo mission to investigate the prison of Alcatraz which lead to his capture and being jailed with the female Warden and the guards which was scheme from cobra to deceive the Joes and to capture the "Comstock load submarine PM GeneratorX (EMP-electromagnetic pulse)", after heavy attack from Cobra its up to Grid-Iron to defeat the odds, save his friend Pathfinder and save the day.

Also he appears in the Dic second season in the following episodes: El Dorado The Lost City of Gold and A Is For Android along numerous cameo in other episodes. 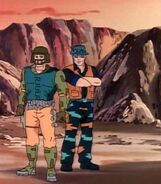 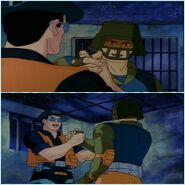