Joepedia
Register
Don't have an account?
Sign In
Advertisement
in: Articles in need of images, Character Stubs, Cobra-La,
and 2 more

Pythona is a Cobra-La character from the A Real American Hero series.

It is obvious to anyone who set their eyes upon Pythona that there is something different and unusual about her. With claws, strange eyes, pale skin and attire, there is definitely something animalistic and at the same time alluring about her. As an emissary for the kingdom of Cobra-La, this bizarre attraction she brings out from others enables her to get their undivided attention. Should they choose not to listen to the message she brings from her master, Golobulus, her lightning quick reflexes, fighting skills and poison-tipped claws will make them regret for doing so. 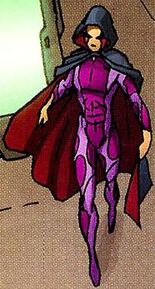 In 1978 Pythona and a squad of Royal Guards prevented Nemesis Enforcer and the Decepticon Bludgeon from slaying Joe Colton, code-name G.I. Joe, and Chok-Pa when the Adventure Team were in the Himalayas. At her command the humans were kept prisoner for over twenty-five years, with Chok-Pa dying in prison and Pythona often taunting Colton. When she told him of intruders from a group called G.I. Joe, Colton responded and freed himself.[1] Pythona did nothing to stop him, claiming he was just an old human and no threat, but Golobulus was furious and ordered her to release Nemesis Enforcer to deal with the intruders. When the Enforcer battled Colton the latter appealed to Pythona's sense of compassion about the Cobra-La plan to purge Earth of the humans. She claimed to be unmoved but at the last moment produced a knife and slew the Enforcer, saving Colton's life. She was subsequently taken into human custody.[2]

Pythona briefly appeared in a vision to Serpentor when his concentration lapsed during the trial of Destro. She repeatedly told him "Cobra needs the Broadcast Energy Transmitter" and he found himself attracted to her.[3]

Pythona invaded Cobra headquarters and reached Serpentor, revealing herself as having come from a secret civilization known as Cobra-La. She is a formidable femme fatale assassin. She and Serpentor appear to share feelings for each other.G.I. Joe: The Movie