Rampart is a G.I. Joe character from the A Real American Hero series.

It is said that playing too many video games will lead you nowhere and make your brain stupid. Not so for Rampart. What happened instead is it raised his hand/eye coordination and reflexes to new levels never thought humanly possible. So much that he mastered every video game ever published with a particular liking for shoot 'em games. While he did get a college degree, he could have still made a profitable career as the best video gamer of them all. He needed something more fulfilling.

Fortunately, the military is always in need of men who can think fast, move fast and make split-second decisions. Enlisting in the Navy, his dream of shooting down actual enemy aircrafts and missiles is realized. Blasting virtual creations just doesn't compare to the thrill of the real thing.

In the Marvel Comics G.I. Joe series, he first appeared in issue #115. He served in the "Battle of Benzheen". He and Backblast maintain a sentry point deep in the Benzheen desert, and destroy a Rattler plane chasing the Joe pilot Ghostrider.

In the Devil's Due series, he was killed by Red Shadow agents while on assignment in South America.

In the episode "United We Stand" Ambush and Pathfinder have to work together or perish after salvo is brainwashed by cobra and cobra commander order the G.I.Joe not to attack if they so he will lunch the missiles world wide... since ambush and pathfinder are the 2 only G.I.Joe not in activate duty while recovering in the infirmary its up to them to infiltrate the cobra base to stop cobra commander while Bullhorn try negotiating with Cobra commander and Rampart standing on the roof top GI Joe HQ shooting incoming cobra attacks.

In the episode "Victory at Volcania, Part 1 and Part 2" he is seen resting and playing with Joes football and afterward battling cobra.

Cobra attacks while the Joes are resting on their island Club Joe, Bullhorn and salvo are fishing instead of playing football with others when their suddenly attacked by cobra and are captured after learning of their plans they escape to warn the others and while General Hawk is questioned for his usefulness to G.I. Joe team and Cobra has the Joes on the run. Captain Grid-Iron and Bullhorn attack the volcano base to stop the laser guns and Destro to distract them while Hawk and Ambush climb the head of mountain to set the explosives.

In the episode "Cold Shoulder" G.I. Joe/Oktober Guard team up with Rampart and Captain Krimov to work on a space satellite while Sgt. Slaughter, Sub-Zero and Stretcher monitoring their movements , but Cobra wants it for themselves which led to the capturing of the satellite and the 2 Joes. it up to sub-zero and Stretcher to save them while the Sarge back them up with the troops against cobra attacks. 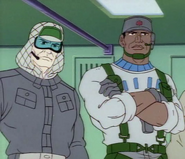 United We Stand Rampart on the phone

United We Stand Rampart firing a rocket at cobra while smiling

Retrieved from "https://gijoe.fandom.com/wiki/Rampart?oldid=51070"
Community content is available under CC-BY-SA unless otherwise noted.