View source
watch 01:36
We're Getting Mutants in the MCU - The Loop
Do you like this video?
Play Sound
The name Ripcord refers to several versions of the same character.
For a list of the other versions, see Ripcord.

Ripcord is a G.I. Joe character from the A Real American Hero and G.I. Joe vs. Cobra series.

Ripcord has one of the most dangerous assignments among members of the G.I. Joe Team. What he does is jump from a plane so high up in a sky that you need an oxygen mask just to breathe. He then falls like a dead rock for thousands of feet and, at the last possible moment, opens his parachute. The margin for error is way too small for any corrections. All this is to avoid visual and electronic detection. It takes a man who more than really loves skydiving to take that assignment. Ripcord has great confidence in his skills, experience and coolness under pressure. 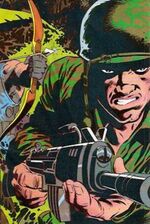 In the Marvel Comics G.I. Joe series, he first appears in issue #32. Ripcord develops a relationship with a civilian named Candy Appel, who worked freelance as "Bongo the Bear" performing at birthday parties and similar events. Their relationship is marred by Ripcord being unable to tell Candy his real name, or clearly explain why they draw the attention of Cobra forces.

Ripcord is sent with Stalker, Recondo and other Joes to rescue the peace activist Adele Burkhardt from the war-torn fictional country of Sierra Gordo. Ripcord expresses displeasure they are fighting for a woman who opposes the military. Stalker berates him, informing him that unpopular opinions are just as valid. Burkhardt is safely rescued, but not without the loss of three Tucaro soldiers who volunteered to assist. After Ripcord and Candy call it quits, it is discovered that Candy is the daughter of a Cobra Crimson Guardsman. Candy is taken into custody, but vanishes due to interference by the Cobra agent Buzzer. This sets Ripcord out on a mission to Cobra Island, to find her and clear her name, unaware that Candy has been killed during a coincidental visit to Springfield, the headquarters of Cobra. He tricks Ace during an overflight into activating his helmet, which allows Ripcord to parachute out, an act unofficially approved by General Hawk. Ripcord battles Zartan, in an isolated section of Cobra Island. Both wound each other, but Zartan subdues Ripcord and switches identities with him. Zartan (as Ripcord) is rescued by G.I. Joe, while Ripcord (as Zartan) is taken into Cobra headquarters. Ripcord's physical differences from Zartan are accepted, because the Cobra agent is a master of disguise.

Ripcord eventually ends up at the main center for Cobra, the city of Springfield. After giving Joes the location of Springfield, he makes an escape attempt, but is captured by a loyal Cobra child. Ripcord's information allows G.I. Joe to raid Springfield. They safely rescue him, but not before he undergoes torture in the "Brain Wave Scanner", a device that was being used to feed information into the form of Serpentor. After this incident, Ripcord takes time off from active-duty. He returns in time for the opening of The Pit III. He is later part of the G.I. Joe forces deployed to back Serpentor in the Cobra Civil War. 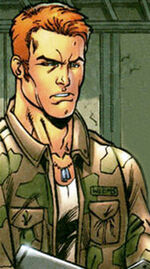 Ripcord is an active Joe in the Devil's Due company's continuation of the series. He is active in attempting to neutralize the threat of Tyler Wingfield, who runs a technologically advanced militia. Ripcord is part of Hawk's team when the Joes invade Cobra Island and engage in battle with Cobra and Serpentor's forces.

Ripcord returns to Sierra Gordo and again works with Recondo. Along with the Joes Dart, Tunnel Rat and Low-Light they investigate an invading army from a neighboring country. They work with local resistance to kill many of these soldiers; it degenerates to hand-to-hand combat and Low-Light and Tunnel Rat are severely injured. It turns out it was all a 'scam' by Destro and his Iron Grenadiers to set one country against another for profit. Duke forces Destro to call this off; Ripcord realizes something stinks about the whole situation. On returning to the PITT, he confronts Duke about his actions, indicating he's unhappy with how Duke has changed.

Ripcord first appears in Battle Action Force as a British who is recruited along Flash and Recondo in Action Force under the command of Duke. After Zartan begins killing corporals, the other soldiers of the camp blame the three men (Flash, Recondo and Ripcord) of bringing bad luck to the camp, so they quit. However, when they discover that Cobra is planning to attack the camp, they return and warn everybody.

Rip Cord appeared in the original G.I. Joe animated series. He first appeared in the animated series in the Revenge of Cobra mini-series. Rip Cord is also featured in one of the famous "And Knowing Is Half the Battle" Public Service Announcements where he instructs a young ballplayer to have his eyes checked after repeatedly striking out due to blurred vision saying that it's best to confront a problem head-on rather than avoid it.