Salvo is a G.I. Joe character from the A Real American Hero series.

Salvo is the G.I. Joe Team's Anti-Armor Trooper. His real name is David K. Hasle, and he was born in Arlington, Virginia. Salvo was first released as an action figure in 1990,and again in 2005. Both versions have the T-shirt slogan 'The Right of Might'.

In the Marvel Comics G.I. Joe series, he first appeared in issue #114, There, he fights as part of a large scale operation against Cobra forces in the fictional country of Benzheen, Steeler, Dusty, Salvo, Rock 'n Roll and Hot Seat get into vehicular based combat against the missile expert Metal-Head.

Reappeared in issue #130 part of the Joe team on-site who defends G.I. Joe headquarters in Utah against a Cobra assault.

In the episode "United We Stand" Ambush and Pathfinder have to work together or perish after Salvo is brainwashed by cobra and Cobra Commander order the G.I. Joe not to attack if they so he will lunch the missiles world wide... since ambush and pathfinder are the 2 only G.I.Joe not in activate duty while recovering in the infirmary its up to them to infiltrate the cobra base to stop cobra commander and save Salvo while Bullhorn try negotiating with Cobra commander.

In the episode "Revenge of the Pharaohs" While Bullhorn and Lady Jaye are visiting Pyramid City museum they are attacked by Cobra who tries steal but when Night Creeper Leader receives a hit on the head and thinking he is a reincarnated ancient Pharaoh and has his sights set on Lady Jaye as his queen. when General Hawk tell Bullhorn that he must negotiate with Cobra commander while General Hawk, Salvo the Joes are evacuating the people to safety and to save Lady Jaye from a destroyed city.

In the episode "Victory at Volcania, Part 1 and Part 2" Cobra attacks while the Joes are resting on their island Club Joe, Bullhorn and salvo are fishing instead of playing football with others when their suddenly attacked by cobra and are captured after learning of their plans they escape to warn the others and while General Hawk is questioned for his usefulness to G.I. Joe team and Cobra has the Joes on the run. Salvo, Captain Grid-Iron and Bullhorn attack the volcano base to stop the laser guns and Destro to distract them while Hawk and Ambush climb the head of mountain to set the explosives.

In the episode "The Nozone Conspiracy" Cobra decides to blackmail humanity into protecting itself from the Ozone. while Bullhorn who is listing to the commercial and trying to located their secret hideout and to find ambush location who sneaked up one of their truck. While Salvo, Grid-Iron, Sgt. Slaughter helps Sub-Zero to stop the cobra sun-cream and poison gas from reaching the Ozone of earth 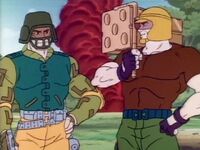 Captain Grid-Iron and Salvo (missing the THE RIGHT OF MIGHT on his T.shirt) episode United We Stand 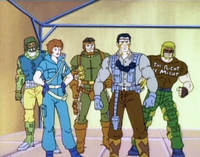 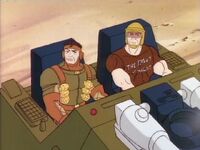 General Hawk and Salvo Episode Revenge of the Pharoahs

Bullhorn reading and Salvo fishing on a boat 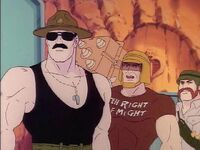 The Sarge, Salvo and Ambush Episode The Nozone Conspiracy
Add a photo to this gallery

Retrieved from "https://gijoe.fandom.com/wiki/Salvo?oldid=43862"
Community content is available under CC-BY-SA unless otherwise noted.