A hard charger from the so-called "greatest generation" Robert Savage joined up in the waning days of 1942, ready to fight the good fight. A survivor of Omaha Beach and an infantry commander renowned for his skill, Savage was listed KIA after a German science facility he and his squad attacked exploded.

In 1995 a documentary crew doing a special on the "super-science" of the Third Reich stumbled upon the cryogenically preserved body of Savage. After being revived and acclimated to the changes time had brought, Savage was remanded to the custody of the G.I. Joe team for observation. Within a year however, Savage left the team, his "Screaming Eagles" in tow, and now operates as second-in-command of Special Counter-Terrorism Unit Delta.

Sgt. Savage was the toughest commander on the battlefields of World War II.[2] During his years of service, he earned multiple medals of valor.[3] His skills as a pilot of P-40 Warhawks made him an ace.[4]

At an undisclosed time during the second World War, Sgt. Savage planted explosives that sank a U-boat.[5]

In an undisclosed European location in 1944, Sgt. Savage led four other soldiers out of a foxhole to surprise enemies that were bombarding them.[6]

In 1944, Sgt. Savage and his platoon were led into an ambush by Krieger.[7] The enemy robots attacked before the soldiers could react.[8]

Fifty years later, Savage was discovered in cryogenic stasis in a ruined laboratory. He was revived by the G.I. Joe team.[9]

Savage recognized the brilliant inventor of the Orbital Space Platform, Dr. Stromm, as the traitorous "Blitz" Krieger.[10] Sgt. Savage immediately began to hunt down General Blitz.[11] He even speculated about placing Blitz into the freeze chamber.[12]

At some point after his revival, Savage defeated a group of barroom thugs who mocked his old-fashioned uniform.[13]

Savage, along with the other Screaming Eagles, defends a nuclear facility from the I.R.O.N. Army, drawing the enemy into a trap by hiding under the dirt of their bunker before attacking and driving back General Blitz's forces.Sgt. Savage vs. Gen. Blitz

While on maneuvers in the Arctic, Savage and the Screaming Eagles were ambushed by a platoon of Arctic Stormtroopers. Despite heavy artillery bombardment the team managed to escape, racking up a few scrapped Stormtroopers on the way.[14]

Savage tracked an I.R.O.N. Army Stormtrooper through the Sahara Desert after surviving the Stormtrooper's attack at an abandoned oasis. Even the cyborg's enhanced senses could not save him from Savage.[15] 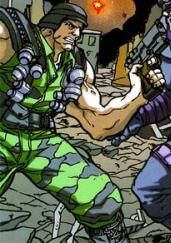 While serving in the reserves, Savage was called upon to fight in Algeria during the conflict now known as World War III.

Vs. The Transformers III: The Art of War

In a Matrix-induced vision of the future, Hawk saw Iron Klaw and Trypticon battling Sgt. Savage and Fortress Maximus.[16]

Sgt. Savage and his Screaming Eagles

In 1944 a news reel reports how Sgt. Robert Steven Savage, a Congressional Medal of Honor recipient, is MIA and presumed dead along with his entire platoon after being sent to raid a German scientific facility. Fifty years later, when the facility is discovered, it turns out that Savage was captured, experimented upon, and cryogenically frozen. The hero's frozen body is given to the Joes for further research.

A scientist called Dr. Garret Stromm tells the Joes that their security detail for a new super advanced space platform which is about to be deployed, is unnecessary. According to Savage, the raid in which his platoon died was sabotaged by a traitor. Savage identifies the scientist as Garrison "Blitz" Krieger, the traitor himself.

Savage is told he was a guinea pig for certain experiments and now has increased reflexes and super strength. These new found "powers", as well as his whole physical condition, wanes from time to time, so Doc gives Savage a DNA compound to stabilize his condition and prevent him from aging rapidly.

Savage takes command of a team of six highly trained, undisciplined soldiers, now calling themselves the "Screaming Eagles". The Screaming Eagles attack the launch in an effort to stop Blitz, his plans, and his new, completely robotic I.R.O.N. Army.Old Soldiers Never Die

Sgt. Savage and his Screaming Eagles

There were plans to make an Air Force Sgt. Savage and a Frogman Sgt. Savage, but these never made it past the prototype stage.[17] However the Air Force version may have become the version included with the Warhawk.

Sgt. Savage on My Useless Knowledge.

Retrieved from "https://gijoe.fandom.com/wiki/Sgt._Savage?oldid=53128"
Community content is available under CC-BY-SA unless otherwise noted.