A pair of 12-page mini-comics were included with select Sgt. Savage and his Screaming Eagles toys, the first part with "Battle Command Sgt. Savage" and the second with "Cyborg General Blitz."

The comics recount a battle in which the Screaming Eagles protect an "atomic plant" from General Blitz and his I.R.O.N. troopers. The Joes are able to defend their bunker from one squad of stormtroopers, as well as the barrage from Blitz's forces who are entrenched in their own bunker. However, when Blitz leads the remaining I.R.O.N. Army soldiers in a charge, the Joes hide in the dirt at the bottom of their bunker as a ruse. The Joes suprise the enemy, sending them on the run and defending the nuclear facility.

Both comics were drawn by Joe Kubert, who had previously drawn two issues of DC Comics which were inspired by G.I. Joe action figures. 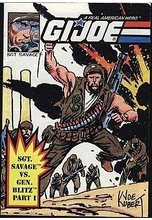 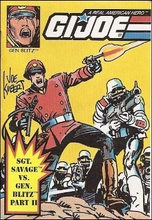 Sgt. Savage vs. Gen. Blitz Part II
Add a photo to this gallery
Retrieved from "https://gijoe.fandom.com/wiki/Sgt._Savage_vs._Gen._Blitz_(mini-comic)?oldid=44222"
Community content is available under CC-BY-SA unless otherwise noted.