Short-Fuze is a G.I. Joe character from the A Real American Hero and G.I. Joe vs. Cobra series.

The Cobra Strikes
Short-Fuze comes from a military family. His father and grandfather both became career top sergeants. He followed in their footsteps and joined the Army. However, he does have a short temper and very sensitive on things said about him. This earned him the codename he sports now. The one thing that calms his temper is his love for abstract mathematics. He can mentally calculate artillery azimuths and plot trajectories. This amazing ability has helped the Joe Team win many battles.

The rescue of Dr. Adele Burkhart was one of Short-Fuze's early missions. He was part of Stalker's landing team whose job it was to take out the airfield and Cobra's air capability. That part of the mission was a success though it turned out to be a ruse. Still, the Joes managed to defeat Cobra and complete the mission.[1] 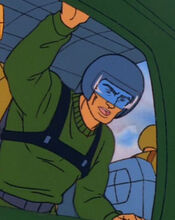 Throughout the early stages of the M.A.S.S. Device crisis, Short-Fuze remained on reserve. Along with Steeler, he spent the time devising a way to bring down the relay satellite that allows the M.A.S.S. to aim its beam around the world. They built the Satellite Killer which was quickly launched only to be shot down by Cobra.[2] The time came to obtain the final element for the Joes' own MASS, Short-Fuze is the first one to spot the meteor located in the middle of a volcano's crater. Cobra intervenes and takes the meteor and Short-Fuze becomes a member of the boarding party, taking the fight to Cobra.[3] When the location of Cobra's base is finally learned, Short-Fuze joins the fight to take down Cobra and the M.A.S.S.[4]