Home Is Where the War Is

Snake-Eyes infiltrates the Cobra castle to rescue Scarlett, but can he overcome the mysterious Cobra ninja?

In the Balkans, Storm Shadow glides aboard a C.L.A.W. to Destro's castle carrying a bound prisoner. He lands and cuts open the sheet covering the prisoner to reveal Scarlett. Cobra Commander orders her taken away. A C-130 plane flies over and Snake-Eyes jumps out, descending towards the castle. Inside, Scarlett has been chained up in a small cellar accessible only through a hole in the ceiling. Storm Shadow touches her face and she bites him. He nearly draws his sword but then leaves. In another room Destro watches as a computer analyzes the C-130's moves and deduces that there is a .000018 probability of a successful airborne insertion.

Snake-Eyes lands on the roof of the castle while inside Scarlett produces a hair pin and proceeds to pick the locks on her chains. On the roof Snake-Eye overpowers a guard. Meanwhile Destro studies his chessboard and looks intensely at the figures. Storm Shadow goes to Scarlett's cell and opens the manhole cover only to be attacked by Scarlett with the chains and pulled inside. She climbs out and throws the cover in place as Storm Shadow tries to follow her.

The roof several troopers confront Snake-Eyes who disposes of most of them with knives. The last tries to strangle him so he throws the trooper over the edge. As the trooper falls he is seen by Destro who takes a squad up to the roof. On the roof they find one surviving trooper who sends them to the rear. Once gone the trooper takes off his uniform to reveal he is actually Snake-Eyes, with the real trooper tied up and dangling over the edge.

Storm Shadow escapes the cellar and summons three red ninjas. Meanwhile Scarlett attacks two troopers transporting the C.L.A.W. and takes the glider for herself. Snake-Eyes has reached the cellar to find it empty when one red ninja attacks but Snake-Eyes defeats him using the manhole cover as a blunt weapon. A second red ninja stands at the top of a flight of steps and Snake-Eyes throws a fragment grenade. Snake Eyes climbs the stairs, while further up the third red ninja and Storm Shadow wait to confront him. The red ninja attacks with a mace but Snake-Eyes throws him into the path of Storm Shadow's blade. Then he leaps over Storm Shadow and races for the roof where Scarlett is flying the glider. She comes in to land as Storm Shadow reaches the roof. The Cobra ninja throws his sword at Snake-Eyes but Scarlett lands in front of him. Suddenly Snake-Eyes slams his hands together in front of Scarlett's chest and catches the sword, throwing it over the edge. Snake-Eyes and Scarlett take off. As they leave, Storm Shadow spots a red tattoo on his foe's forearm that is identical to his own.

This issue is told without a single speech bubble, sound effect or caption. Several rumors have circulated about the whys and wherefores of the lack of dialogue, but the most prominent one is that "Silent Interlude" was originally supposed to have dialogue in the story. As the issue was already behind schedule, Hama elected to do penciling duty as well. However, there was insufficient time to do the lettering as the issue needed to go to press.

This story, however, is false.

It is true that the issue was produced in haste, as the book was behind schedule, leaving Larry Hama to not only write the issue, but draw the issue as well (he even provided the classic cover). However, the idea for a silent issue had been in Hama's head for some time. As he said in an interview,

So while the choice to make this issue silent may have been made because the issue was late, it was not a mistake, as the story was always intended to be that way. 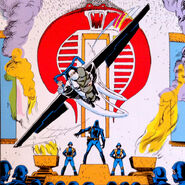