G.I. Joe: Ever Vigilant
Snake Eyes: G.I. Joe Origins is an upcoming G.I. Joe series film set to release on July 23, 2021 from Paramount Pictures. The film focuses on the character of Snake Eyes, depicting his origin story before he became the silent character fans know today.

Snake Eyes: G.I. Joe Origins stars Henry Golding as Snake Eyes, a loner who is welcomed into an ancient Japanese clan called the Arashikage after saving the life of their heir apparent. Upon arrival in Japan, the Arashikage teach Snake Eyes the ways of the ninja warrior while also providing something he's been longing for: a home. But, when secrets from his past are revealed, Snake Eyes' honor and allegiance will be tested, even if that means losing the trust of those closest to him.

The film opens with Snake Eyes in an all-out, no-rules cage fight before moving on to explore the character's inner struggles.[1]

On March 20, 2021, it was reported that in the wake of the film's delayed release date due to the COVID-19 pandemic, reshoots were underway on the film. The news was announced by Henry Golding on YouTube.[2] The film was originally scheduled for release on March 27, 2020 before being rescheduled a number of times due to the pandemic.[3] In 2016, Paramount established a writers' room to leverage ideas for Hasbro properties, but nothing came of it. Producer Lorenzo di Bonaventura stated that while it was a good idea, it nevertheless didn't work very well. The producers toyed with multiple directors to try to keep the franchise going, including considering sequels for G.I. Joe: Retaliation, some of which remain in development. Another potential film centered around the character of the Baroness.[4] 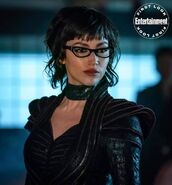 Add a photo to this gallery

Storm Shadow
Add a photo to this gallery

Retrieved from "https://gijoe.fandom.com/wiki/Snake_Eyes:_G.I._Joe_Origins?oldid=54552"
Community content is available under CC-BY-SA unless otherwise noted.