View source
The name Snake-Eyes refers to several versions of the same character.
For a list of the other versions, see Snake-Eyes.

This is about the character from the film Snake Eyes: G.I. Joe Origins. You may be looking for the film itself, also known as simply Snake Eyes, or the version of Snake Eyes seen in the original films.

Snake Eyes is the main character of the film Snake Eyes: G.I. Joe Origins. He is known only by this moniker, which he adopted following the murder of his father. A mysterious man, he hides his past and drifts from place to place until circumstances force him to a reckoning.

As a child, Snake Eyes witnessed the murder of his father in a cabin in Washington. The killer forced him to roll a pair of dice for his life, which were rigged to always come up snake eyes. He tried to intervene, but was pushed aside and fled to the edge of a nearby forest. He then heard the gunshot that ended his father's life and witnessed the cabin going up in flames.

20 years later, Snake Eyes now drifts from place to place, fighting cage matches. Playing the underdog, he wins matches until nobody will bet on him, then moves on to somewhere else. One day, he is approached by a criminal lord named Kenta who asks him to join his crew. He refuses until Kenta offers to get information on the man who killed his father. Weeks later, Snake Eyes works at the docks of Los Angeles, helping to smuggle weapons by inserting them inside large fish. He is unexpectedly summoned by Kenta.

Kenta brings him before a man named Tommy. He orders Snake Eyes to kill him, saying that Tommy his cousin from Japan and has betrayed him. He hands him a gun and when he hesitates, tells him there are certain things one must do. Snake Eyes, however, points the gun away from Tommy and fires at the ground. He and Tommy then mount a daring escape, stealing a truck and fleeing pursuers who repeatedly shoot at the truck and stab its windows with swords. The chase is eventually ended by the LAPD and Snake Eyes passes out due to lack of blood.

When Snake Eyes awakens, it is on Tommy's private jet. Tommy explains that he is a member of the Arashikage Clan from Japan and that Kenta is his cousin who was banished. He asks Snake Eyes why he saved his life and Snake Eyes replies that he looked into his eyes and saw honor. Tommy tells him that Kenta will be after him and he can never go back. He offers Snake Eyes a new home with his own people.

The trials of the Arashikage

The two arrive in Japan, where Tommy brings Snake Eyes to Arashikage Castle. There, he introduces him to the clan leader, Sen, his grandmother, and himself by the full name of Tomisaburo Arashikage. He explains that he's looking for warriors to replenish the clan and fight alongside him. He invites Snake Eyes to join a fabled history that spans hundreds of years if he can pass three tests. He warns, however, that the final test will be fatal. Akiko, the castle's security guard, is distrustful of his status as an outsider and skeptical of him being able to pass any of the tests.

Snake Eyes passes the first test, which involves trying to exchange bowls with one of the clan's masters, Hard Master. He tries three times by force and fails before realizing the meaning of the words he was told: to let go of arrogance. He simply humbly asks to exchange bowls and his request is granted, passing the test. That evening, he departs the castle by motorcycle and secretly meets with Kenta. Kenta praises him for getting in with the clan and mocks Tommy for falling for his act. He asks Snake Eyes to steal the clan's prized jewel, the Jewel of the Sun. Snake Eyes warns him about the possibility of the third test being fatal and Kenta warns him in return to get the jewel, or else he will never get back at his father's murderer. The next day, Tommy gives Snake Eyes a katana, an ancient heirloom of the clan known as Morning Light. He tells Snake Eyes that it's easy to shoot with a gun, but a sword is a weapon of honor. He also explains to Snake Eyes the history of the Jewel of the Sun, that the legend is that it was sent down to the clan by the Sun Goddess. They have sworn an oath to protect it but never use it, for its power is a dangerous temptation.

Snake Eyes proceeds with the second test, in which Blind Master guides him to a forest. There, he faces a vision of the day that his father was killed. He apologizes for not being able to save him, but his father tells him that he was only a kid and it wasn't his fault. He asks Blind Master if he passed, but Blind Master tells him that it is not a test one simply passes, that he must release his weakness. Later, Tommy learns that Kenta is back in town. He pays a visit to him with Snake Eyes and learns that he is working with an international terrorist organization called Cobra and a terrorist known as the Baroness. Afterwards, Snake Eyes again pays his own visit to Kenta, telling him he didn't sign up to work with terrorists. Kenta and the Baroness, however, show him a video of the man who killed his father, tied up in a secret cell. They warn him that he must complete his mission or they will never reveal the man's location, but simply let him go.

Snake Eyes returns to the castle and takes the third test. The test involves descending into a deep pit and facing off against three anacondas. The anacondas are able to detect the truth and strike if one is not pure of heart. Though things seem okay at first, they soon lash out at Snake Eyes and then coil around him. Seeing this, Akiko leaps into the pit to save him. He is then brought to the temple's common area, where he is warned that only the full truth will save him. He admits that his heart is full of vengeance against his father's murderer. In return for the truth, his life is spared. He meets with Tommy, who tells him that they could have been brothers. They each cut their own hands and shake on it. That evening, Snake Eyes purposely triggers the castle's security alarms. He watches as Tommy and Akiko visit the temple that holds the Jewel to ensure that it is safe, then sneaks in and uses Tommy's blood to access it. He is then confronted by Akiko, who says she had hoped she could trust him, but quickly dispatches her.

Snake Eyes returns to Kenta and provides him with the Jewel. Kenta immediately demonstrates its power by using it instantly incinerate an enemy. He then directs Snake Eyes' attention to the shack that holds his father's murderer before taking off with the Baroness. Snake Eyes enters the shack and removes the veil from the man. He tells him that he killed his father, presenting him with the charred dice taken from the burned house. He tells him to roll for his life and the dice, being rigged, naturally come up snake eyes. Before going for the kill, he asks the man why he killed his father. The man replies that when Cobra tells you to do something, you do it. Hearing this, Snake Eyes is shocked and dazed. He realizes that he himself has been working for the same organization that killed his father. He raises his sword, but instead of killing the man, slashes the handcuffs binding him. Overcome with guilt by his betrayal of Tommy, and sickened at the fact that he unknowingly helped the criminals who took everything from him, he vows to set things right, taking off in pursuit of Kenta and the Baroness.

Using his motorcycle, Snake Eyes quickly catches up with the group and begins battling them in motion. Seeing this, Akiko realizes that he is on their side, but Tommy is still upset about his betrayal. He begins fighting Snake Eyes until Snake Eyes convinces him that they have a shared enemy. They make their way to the castle, where Kenta has been using the Jewel to wreak devastation. Though he has cornered Sen, she refused to surrender. Meanwhile, he has also betrayed Baroness, who has chosen to temporarily align with Scarlett, a member of the crime-fighting organization G.I. Joe. Together, they all manage to corner Kenta and disarm him of the Jewel of the Sun. When he tries to escape, however, Tommy lashes out with the Jewel of the Sun, but only succeeds in cracking a wall.

Snake Eyes pursues Kenta into the forest and to the edge of the anaconda pit. He manages to knock him in. Kenta defeats one anaconda, but is overwhelmed by the other two. Snake Eyes then returns to the castle, where he is judged to be pure of heart and having passed the third test. Sen, however, disinherits Tommy for having used the Jewel of the Sun in anger. He leaves, swearing vengeance against both the clan and Snake Eyes. Afterwards, Scarlett of G.I. Joe meets Snake Eyes in his room in the castle. She reveals that his father was also a member of G.I. Joe, sworn to serve the same commander as her: General Joe Colton. She offers him a file and an offer to join the organization. He, however, leaves in search of Tommy, hoping to bring him back. Before he leaves, Akiko hands him a bag containing his iconic black outfit. He dons the outfit and sets off.

From a young age, Snake Eyes has been driven largely by one motivation: vengeance. After witnessing the murder of his father as a child, all the innocence he had was lost, and replaced with twenty years of violence and loneliness. He purposely keeps a very low profile, such that Akiko is unable find any hits on his fingerprints or facial recognition in an international database. Due to being consumed by revenge, Snake possessed a somewhat duplicitous nature, acting as a double-agent for the rogue ninja Kenta. As time passed he began to bond with the Arashikage ninja clan, but his hunger for revenge reveals his heart to be polluted and therefore unworthy of being a member of the ninja clan. Upon realizing that he had been unknowingly working for Cobra, his father's mortal enemies, Snake is overcome with disgust at this revelation and guilt for letting his lust for revenge cloud his judgment. Realizing that his hatred would cost him his new family if nothing was done, Snake risks his life to atone, and in doing so frees himself from the ghosts of his tragic past. Filled with remorse for Tomisaburo's fall, and subsequent abandonment of the clan, Snake refuses to let his blood brother go down the same evil path he took, and taking on his iconic shinobi armor, and officially welcomed within the House of Arashikage, he now seeks to bring down Cobra, and reclaim his blood brother. 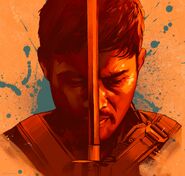