View source
The name Storm Shadow refers to several versions of the same character.
For a list of the other versions, see Storm Shadow.

Storm Shadow is the secondary lead character of the film Snake Eyes: G.I. Joe Origins. Originally known as Tomisaburo "Tommy" Arashikage, Storm Shadow was the heir apparent of the Arashikage Clan and the grandson of its leader, Sen. His bitter rival is Kenta, who has been banished from the Arashikage Clan. After being rescued by Snake Eyes, he takes the man on as his apprentice, only for the two to come to a bitter reckoning.

The man known only as Snake Eyes is working for Kenta on the docks of Los Angeles, smuggling weapons. One day, Kenta summons Snake Eyes and tells him to kill a man, Tommy. He tells him that Tommy is his cousin and that he betrayed him. He hands Snake Eyes a gun but he refuses, instead fleeing the man and helping him to escape. In the process, Snake Eyes loses blood as the two flee Kenta's attacking agents and passes out.

When Snake Eyes awakes, he and Tommy are aboard Tommy's private jet. Tommy tells him that there is no going back for him with Kenta. He asks why Snake Eyes saved him and he replies that he looked into his eyes and saw honor. Tommy explains that the two of them grew up together. Both of them were in line to become leader of their clan. As there could only be one, Kenta tried to have him killed. Upon the discovery of his treachery, Tommy was tasked with his sentence and chose to banish him.

The shadow before a storm

Akiko, the clan's security guard, speaks with Tommy privately, telling him she thinks he's making a mistake. She explains that she did a background check on Snake Eyes and could find nothing: no fingerprints, nothing on facial recognition, a virtual ghost. She pleads with him, reminding him that Snake Eyes was working with yakuza, but he replies that Snake Eyes saved his life and he owes him a chance. He tells her that if he's wrong, they'll find out tomorrow, given that 80% of initiates fail the first test.

The next day, Tommy bears witness as Snake Eyes takes the first test. He cheers to himself as Snake eyes passes the test, which involves the realization that a bowl cannot be taken from the Hard Master by force, but can be obtained by simply asking. Afterwards, he explain to Snake Eyes that he's been groomed to lead his whole life but that he must adapt to the new world if the clan is to survive.

That evening, Snake Eyes borrows one of the clan's motorcycles and heads out alone. He secretly meets up with Kenta, who praises him for getting in with the clan, mocking Tommy's belief in the line "I looked into your eyes and saw honor." He tasks Snake Eyes to betray the clan by stealing an ancient artifact called the Jewel of the Sun.

The next day, Tommy presents Snake Eyes with a katana, Morning Light, as a gift for passing the first test. He also tells Snake Eyes of the Jewel of the Sun, explaining that the members of the clan swore an oath both protect to it and to never use it. He also explains that the jewel is protected by a DNA lock that can only be opened by members of the clan. "Blood matters to my family," he tells him.

Later, Tommy learns that Kenta has returned to Japan. Learning that he is taking delivery of a shipment in Shinjuku, he decides to try to get the jump on him, bringing Akiko and Snake Eyes along with him. As he prepares to set off, Akiko comments that he has the look he gets sometimes, "the shadow before a storm." He discovers that Kenta is stockpiling a huge amount of firepower with the aid of Cobra, an international terrorist organization. To deal with it, he decides to call in backup in the form of Scarlett, a member of an elite team known as the G.I. Joe. When he reaches her, she reports on the arrival of a woman known as Ana DeCobray, or Baroness, who is linked to an attack that killed a member of parliament and over 200 civilians. Afterwards, Snake Eyes returns to Kenta secretly, telling him he didn't sign up to work with terrorists. Kenta, however, orders him to continue the mission, saying that otherwise he will never gain access to the man who killed his father.

Snake Eyes undergoes the second and third tests, but the third test reveals that his heart is not pure. Faced with several anacondas, they detect the truth of his secret purpose to avenge of his father. He admits the truth of this and his life is spared. Tommy, however, is deeply disappointed. He says that he should have told him, that they could have been brothers. He tells him that he, in fact, the only brother he has ever known and he would pay him back with his life he had to. He tells Snake Eyes to keep Morning Light and the two each cut hands, sharing a bond of blood.

That evening, however, Snake Eyes purposely triggers the castle's defenses, secretly watching as Tommy and Akiko race to the hidden temple that holds the Jewel of the Sun. He then waits until they've seemingly left and uses the blood to bypass the lock, stealing the jewel. He is confronted by Akiko, but easily escapes. Tommy then declares to Sen that he'll bring her Snake Eyes' head.

Snake Eyes brings the Jewel to Kenta and in return is granted access to the man who killed his father. When, however, the man reveals that he killed Snake Eyes's father under Cobra orders, Snake Eyes realizes that he's been working for the same group that killed his father. He sets off to fight Kenta. Meanwhile, a pursuing Tommy and Akiko see this, but Tommy is still enraged. He fights Snake Eyes until Snake Eyes finally talks him down, saying that it's more important that they stop Kenta.

The two arrive at the castle to find that Kenta has wreaked devastation by using the Jewel's fiery powers. Nevertheless, they manage to corner him and fight him to a standstill. When, however, Kenta moves to escape, Tommy is unable to control himself. He uses the jewel to strike at Kenta, but only succeeds in blasting a wall next to him. Snake Eyes tracks him into the nearby forest and finally corners him in the anaconda pit. The anacondas sense that Snake Eyes is now pure of heart, but know that Kenta is not. Kenta manages to kill one of them, but then is overcome by the others.

Back at the castle, Sen calls out Tommy for his actions, saying that she will be the last of their family to lead the Arashikage. He replies that he had no choice, that he only used the Jewel to defend their people. Sen answers that there is always a choice and that their clan swore an oath to never use the jewel, only protect. She tells him to remember his vows to forever serve the clan, but he shouts that he has given his life for the clan and sacrificed everything. Calling leadership his blood right, he stalks out, warning Snake Eyes that he offered him his life and next they meet, he will be the one to take it. As he leaves, Sen tells him to wait, saying that he will always be part of the family.

Snake Eyes leaves, declaring his intention to find Tommy and bring him home. Meanwhile, Tommy boards his private jet. There, he discovers the Baroness. He is startled, but she tells him she's not there to kill him, but rather to make him an offer. She says he's lost an army, but she can get him a better one. "Call me Storm Shadow," he replies. 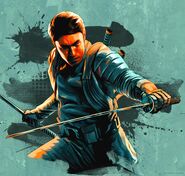